How can I connect my domain or subdomain?

The Basic plan includes a subdomain at Leapjuice. An example would be: yoursite.leapjuice.com

For other plans, you can specify your domain (or subdomain) during the sign-process. You can also submit the contact form after your create your account and let us know.

Don’t know your domain yet? No problem. We’ll create a temporary site then transfer this to your new domain when ready.

We will create the connection on our end and send you instructions for your domain name registrar.

Can I cancel any time?

Yes. You can login to your account and cancel your plan subscription. This will take effect at the end of your current term and will not renew.

How does your Global CDN work?

Improving web performance with Cloud CDN
Using the external HTTP(S) load balancer already improves web performance by setting up HTTP(S) connections on Google’s global edge closer to the requesting client and by negotiating connections using modern protocols such as QUIC, HTTP/2, and TLS 1.3 to reduce the number of round trips and enhance throughput. Further, by using persistent connections to your origin, Google Cloud reduces the overhead of each client connection. Google’s edge locations are connected to our global private backbone network, which allows Google Cloud to optimize routing and reduce latency between the client, Google’s edge, and your backends. You can further improve performance and reduce your serving costs by enabling Cloud CDN as part of your external HTTP(S) load balancer deployment.

Serves static assets from the edge
Because Google’s global edge sends cached requests, the response times to client requests can be reduced. Static elements of your web experience such as images, videos, JavaScript, and stylesheets can be delivered right away without needing to forward the request to the backend systems and wait for a response and data transfer.

Reduces your egress and backend infrastructure costs
By using Cloud CDN with your external HTTP(S) load balancer, you reduce your backend infrastructure costs due to reduced traffic to the backend. Additionally, you can reduce the number of cycles to deliver static content because it is sent from the Google edge. Cloud CDN traffic is billed at a lower egress cost, further controlling costs.

Do I own my data?

Absolutely. This is your stack. You own your content and all your data. We do not use your data, sell your data, or incorporate any ads. Export directly from Ghost or WordPress, or import from another site. We have no control over your publication and take zero fees from all transactions.

Can I take my data with me?

See our information on data.

What is the file upload limit?

The file upload limit applies to Managed Ghost Hosting plans. This is the maximum file size per individual file upload.

For example, if your limit was 10mb you would not be able to upload a 12mb picture, video, or other file.

What is the subdomain at Leapjuice?

This is a subdomain on our site. An example would be yourname.leapjuice.com. If you select our Basic plan your Ghost blog or publication would be on a subdomain. You can upgrade and connect your domain for $5/month at any time.

What is the architecture of your infrastructure? 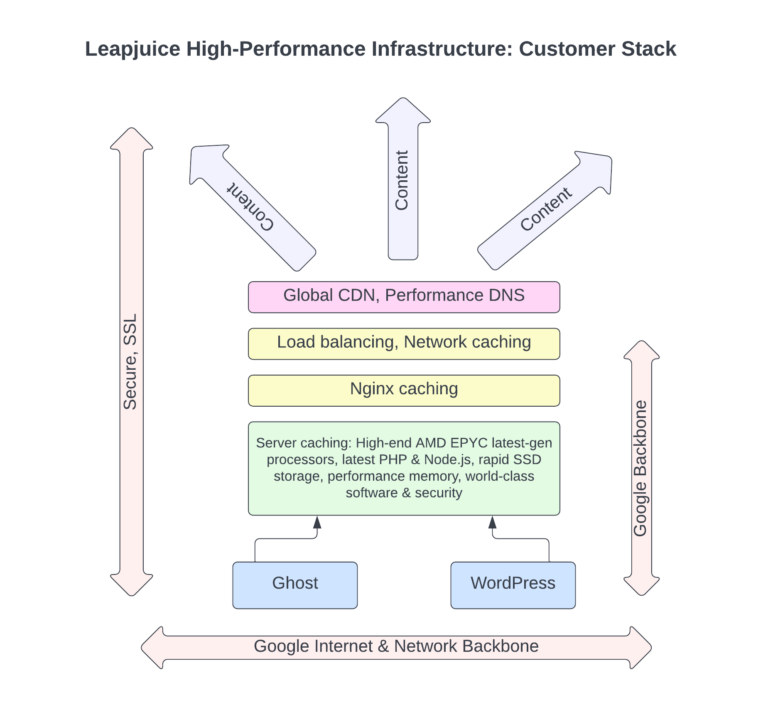 Do you have addons?

What is Cloud Armor?

Improving web protection with Google Cloud Armor
Using the external HTTP(S) load balancer already provides a measure of web protection by setting up HTTP(S) connections on Google’s global edge, offloading your backend infrastructure from needing to handle this process. By enabling Google Cloud Armor as part of your external HTTP(S) load balancer you have increased visibility and control against infrastructure and application attacks.

Detects and blocks by geographical source and IP addresses or IP ranges
Google Cloud Armor leverages Google’s Geo-IP database to identify the geographical region of incoming requests destined for your web infrastructure and allows you to block traffic based on two-character country codes. For example, an online commerce site that does not ship outside of a given country can block requests from common sources of attack traffic. Additionally, Google Cloud Armor allows quick blocking of specific IP addresses or ranges of IP addresses making malicious requests.